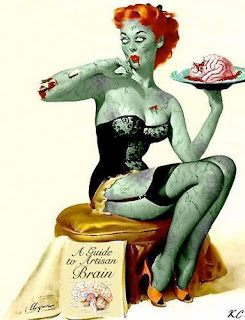 Zombievore: An omnivore as the walking dead; an automaton.

From the outset, let me just say that I don’t think that all omnivores are pernicious zombies without measurable brain waves. Clearly, that would be unfair, the sort of absurd overstatement people love to point to as further evidence of mean-spirited, wrong-headed vegan, feminist sedition. Of course I am not claiming that all omnivores are zombies, just a sizable percentage that has not been calculated yet. By Zombievores, I am referring to individuals who are not using the complex reasoning skills they were presumably born with and are instead idling, aided by their built-in societal privileges and tendency to allow others to do their thinking for them. An omnivore who has abandoned his or her critical thinking faculties in favor of meaningless word repetition and habituated practices, who lurches through life without regard for those who do not share the same privileges, is maintaining a Zombievorous lifestyle. If this description doesn’t fit you, then please, no need to be offended.

There are various categories of Zombievores. There are the Fast Food Zombievores, of course. There are the Custom-Fixated Zombievores, too. These first two types are easy to identify and avoid, unless one should happen to live within your own home. There is a classification of Zombievore that is usually more subtle and cunning than the others, though. They are best known for their ability to penetrate and assimilate into otherwise progressive spheres of society with a message that captivates and seems to be imbued with the spirit of positive change but, upon closer inspection, simply reinforces the established order. These Zombievores are generally affluent, urban, well educated and Caucasian though there are certainly exceptions, and their undisputed leader is Michael Pollan. To understand him and the particular sway he has over his order of Zombievores, one must first get a recap of his recent visit to one of Oprah Winfrey’s famous chairs.

Have you ever gone to a party that you're a little apprehensive about but your friends have been building it up in your head all week so you think that you should stop being such a sour crab apple all the time and just go with the flow? It might be decent, it might even be worthwhile, you think to yourself, psyching yourself up like the pompom girl you never were. You arrive at the party, though, and you can see from the start that it's pretty much what you already expected and feared: vacuous chitchat that you fail at both initiating and maintaining. Joyless tittering back and forth.

"It will be okay," you tell yourself. You remind yourself to smile, to unclench your shoulders, to get a drink. It's still early. The party hasn't hit its stride yet. Then you notice an energy shift in the room and you see him.

He's surrounded by disciples who chuckle as if on cue at his bon mots. When he is speaking of something poignant, the devotees mirror his sincerity, leaning in, nodding, creasing their foreheads with concern. When he is articulating his opinion, it is with the mien of an authority, and if the others surrounding him could, they would start taking notes. Despite the adoration, he considers himself to be humble, earthy even, and despite the salary he draws and his impressive résumé, he is one of the little people, at least in his own mind.

At this point, any shadow of the doubt is instantly erased. You're almost relieved because you now have proof positive that, indeed, nothing good can come of this assembly. This is because Michael Pollan is in the room and he is a Very Special Guest. This was the experience of watching Oprah’s “Let’s try on a new lifestyle this week like a new pair of awesome, pretty shoes!” – I mean - her thoughtful exploration of the vegan lifestyle with that avowed consumer of serenely, lovingly butchered animals, Michael Pollan, curiously stuck to her side for the entire hour like a human barnacle in an expensive suit.

He is the Golden Prince of his particular classification of Zombievores, giving them sustenance and the drive to continue with his patently void nuggets of personal validation. Somehow his followers are able to extract enough from these little nuggets to sustain themselves but it is clear that they are not running on quality fuel. Too smart and ambitious to be a zombie himself, Michael Pollan has become wealthy writing books and telling affluent, greenish omnivores to keep doing what they're doing and telling aspiring affluent, greenish omnivores to do a better job (in other words, spend more money for ever-more exclusive animal products) at what they are doing. The stricken become Pollanated Zombievores. They repeat the catchphrases of their guru, dull-eyed and flat in tone, not an original thought firing their synapses: freeeee-raaaaaange, they lurch. Sus-taaaaaain-able, they growl. Graaaaaass-fed, they drone. Hu-maaaaaane, they bellow as they corner you in the room, humid, meaty breath in your face.

The Golden Prince of the Zombievores was planted by Oprah’s side the entire episode, her wingman, a designer security blanket, the yuppie habit apologist anointed to sanction meat-eating by waving his glittery green magic wand and making everyone feel better, even righteous, with his platitudes that do not stand up to reason.

Zombievores have been rendered insensible by the willful suspension of disbelief that the Pollanization process requires. The Pollanated have decided to stop thinking because it protects their privileges and they have elected to spout empty banalities instead that defy common sense.

“I want to help the small farmers,” they will assert. As though one can’t help small farmers who don’t kill or exploit animals.

“It’s my personal choice,” the Zombievores will rail. Their supposed right to take another’s life simply because they have the means and the privileges is the antithesis of a sound ethical argument. Next.

“It’s sustainable,” they will allege. For real? Given the amount of space these animals would naturally, normally claim in nature, it is a mathematical impossibility to provide the landmass these billions of beings would need thus we have concentrated feeding operations. Given human consumption habits and the lack of adequate landmass to support that, any allegedly sustainable animal product is a luxury item produced for a relatively elite, affluent few. The Pollanated plan is clearly an untenable model for meeting demand, thus it is willful ignorance. Given the sheer amount of animal products people consume, the only model for meeting demand is an industrial one, and that doesn’t sit right with Mr. Pollan and his adherents who vastly prefer an aesthetic of exclusivity. It doesn’t matter if his model is steeped in an illogical, idealized reality: the fairy tale is all that matters here. A drastic reduction in consumption is the only way that this model could realistically function.


“The animals do not suffer,” they will claim. Because getting a bolt in the skull, a knife slashed across the throat or a bullet in the brain always feels fabulous, especially when it is unnecessary. Being forcibly impregnated, getting their milk stolen from them, their babies taken from them and often killed, having their ears notched for identification purposes because we enjoy exercising our personal choice to enjoy their “product” is unkind. Pollanated Zombievores are loath to admit this and even more loath to admit that these are standard practices on many of the beloved, pastoral small farms they believe in with the blind trust of a child putting a tooth under her pillow in anticipation of a winged Tooth Fairy.

So Zombievores. They walk among us. You will find them at the farmers market, at the bookstore, at fundraisers and at the beach. They are everywhere.

To put it plainly, if you value your time, your best defense is to simply walk away. Engaging the afflicted tends to yield scant rewards though even the most seasoned of us occasionally will forget this cardinal rule and attempt to break through. Pollanated Zombievores have everything to lose with honestly evaluating their deliberately cultivated naïveté – their ethics, their creature comforts, their privileges, their integrity and character – and so they must maintain their position at all costs, even if it makes no sense.

If you feel that you have the time to spare, by all means, it is your prerogative to engage such a Zombievore. Remember that they are thwarted by logic and reason. Don’t be scared. The thing about the Pollanated variety of zombie is that they don’t want to eat your brains: they only want to eat heirloom quality, rare, specialty, sloooooow-fooooood-approved brains. You should be fine.

Concerned that you might actually be among the stricken? Ask yourself some questions: Have you referenced the “snout-to-tail” movement without irony or wanting to vomit? Do you fetishize the ovum of your backyard hens? Is your quest for obscure, artisan quality paté leaving you exhausted, stressed out and broke? Do you become anxious when you are fresh out of bone marrow for spreading on your morning baguette? Do you feel an ever-escalating pressure within the ranks of your friends to consume possibly life-threatening viscera in order to fit in?  If so, you may very well be a Pollanated Zombievore.

I don't claim to be an expert in the field of Pollanated Zombievore recovery, but my recommendation is to stop immediately because, seriously, you are tedious. You must simply put yourself on a strict diet of avoiding the works and wisdom of Michael Pollan. Those first few weeks are the most critical and they will undoubtedly be the most rough. The old friends will try to lure you back with promises of nouveau butcher shops, charcuterie and out of the way barbecue joints. If you feel the old bloodlust rise up inside you again, grab a beet, drink some cranberry juice. Fill your home and body with fresh produce. Spend some time outdoors, breathe in the fresh air. Take notice of the birds, the dogs, the squirrels, how they live simply for their own reasons, not for our purposes. Think of how much free time you have to actually bring good into the world now that your brain waves have started to fire up again and original thoughts have begun trickling in. Imagine how liberated you will feel when you're no longer lurching from meat counter to meat counter, shoveling internal organs into your mouth.

You know that you are free when believing self-serving fairy tales has lost its appeal, when empty platitudes ring hollow and critical thinking has been restored. You are free when you recognize that your fleeting desires and tastes do not have primacy over another being's right to live. At this time, the process of Pollanization will have been reversed.