Blizzard baby (from the archives)... 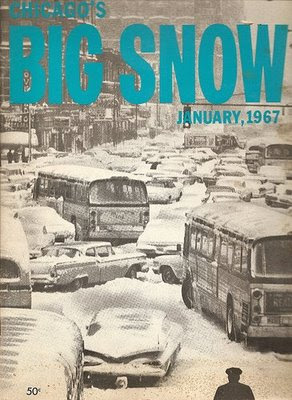 This was something I wrote a year ago on my birthday and seeing as I'm a little behind on everything to make a proper post this week, I'm going to bring you one from the archives today. I'm looking outside right now and there is little snow to be seen, brown grass is actually poking up between the little bit there is, and I find myself longing for an intense snowstorm of the kind we haven't seen for a while here in Chicago. I'm not a huge fan of winter, but there's something about bearing down and surviving something staggering together that makes us grow as people, forcing us to call upon our resilience. Anyway, here it is from last year. And I hope you have a great week!

I was born during one of Chicago's most historic snowfalls, the winter of 1967. I occasionally see footage from this period, old, black-and-white, grainy films, and I cannot believe that I have been alive so long as to come from an old, black-and-white, grainy time. The footage is always quaint, with the snow piled improbably high and bundled up city dwellers struggling mightily to make their way from Point A to Point B, crossing streets with toddler-like grace; footage of taxis hopelessly stuck in walls of impenetrably dense snow. From January 26 through February fifth, 36 1/2 inches of snow fell - this is north of my navel, just so you know - like a gaping hole tore in the sky where all the year's snowfall is stored and it all came gushing out at once.

The stories from this time are thrilling to hear as this is the sort of stuff that Chicago's brawny bruiser of a reputation is built on. In my own family, the snowfall resulted in my mother and I being socked into the hospital for two solid weeks: the city was at a standstill in its battle with the snow, and, clearly, was the punch-drunk underdog, clinging for dear life onto the ropes. Public transportation wasn't running and people couldn't drive. There was looting going on, people were desperate and frightened and paranoid. Somehow, though, one day my grandfather managed to get down to Michael Reese Hospital - it took hours but he was determined - and he was able to identify me, his third grandchild, in the nursery behind the glass, one blizzard baby among dozens of others. My grandmother used this bit of family lore as evidence that my grandfather and I always had a special bond.

I have often wondered how the circumstances of our births, those very few first hours and weeks, work to help shape the people we are to become. My husband and son were both born in the late spring, the time of shoots and flowers and no more blasted snow, and they are much more naturally optimistic people, constitutionally perhaps, than this child of winter. With my son, there were certain circumstances of his birth that made his debut challenging, but as soon as we could, we got him outdoors in the sun and gentle breezes. As soon as I could, every day I took him outdoors, trying to erase any trace of hospitals and medical equipment from his spirit, and that was how he spent his time, pressed up against me in his Bjorn, or, later, on a blanket, with his little fingers grabbing clumps of grass. For those of us who are late fall and winter babies in climates such as the one in which I live, the weeks and months following our births are not quite as welcoming and idyllic. Maybe the cold and unyielding conditions we are born into predispose us to being more familiar with the dark side of life, less full of sunny optimism. Maybe there is no affect at all. (I have a theory that this is why Californians have the reputation of being ditsy and naive: they only know one basic season, and that is mild. They don't have that familiarity with the darkness of winter. My good friend in San Francisco - who grew up in Kansas - has assured me that native Californians are absolutely disengaged from reality.)

On my birthday Sunday, we spent our day at O'Hare International Airport. My mother was flying to Texas to visit my aunt and needs a little help these days getting to the right gate. She missed her flight a couple of years back because she got disoriented, so now we make sure that she is brought directly to the gate. I was able to get passes for my son and I to go with her there from the ticket counter.

At first, I was resentful that my mother booked a flight for my birthday, knowing that I would be the one taking her and spending hours at the airport. It has been two years since we flew anywhere, and so it was an adventure for my son, who, after immersing himself in everything pre-Cambrian, has blasted forward like out of a slingshot into all things space. He got to watch taxiing airplanes and those preparing to land, luggage trucks and the guy with the directional thingamabobs. He had a veggie burger and fries at Johnny Rockets: what more could a six-year-old boy possibly want? (Actually, his own flying saucer, but he's going to have to wait on that one or a trip of his own to New Mexico so he can explore dinosaur remains at Ghost Ranch and evidence of extraterrestrials at Roswell: yes, my child is weird.) Seeing my son so thrilled with his day, and my mother genuinely appreciative, helped to turn my attitude around. I actually enjoyed my time at the airport very much.

Maybe I am moving beyond the circumstances of my birth to a brighter, warmer place. It certainly feels like something has been internally shifting for a while now. I will always remember the winter that has helped to shape me, though, and the isolation and bracing cold on my cheeks. I am glad to have the strength that comes from a birth in a blizzard.
Posted by Marla at 10:15 AM