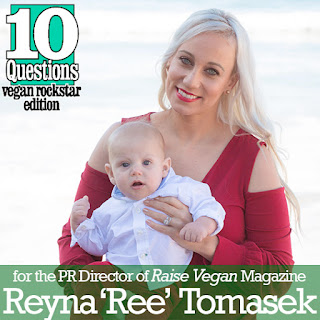 Something we didn’t have when I was expecting my son back in 2002 is the abundance of resources about vegan pregnancy and parenting we have today. The resources we had then – a few books, a few paragraphs from Dr. Spock on the safety of an animal-free diet for children – were helpful but nothing on the level of what prospective (and current) parents who are raising vegan children have today. One of the most exciting developments is the new website, Vegan Pregnancy and Parenting, and their great magazine, Raise Vegan. Between that and their growing social media presence, it’s not such a steep (and lonely) learning curve to be a vegan parent anymore.

One of the reasons Raise Vegan is on the radar like it is must be due to their great promotional savvy. Renya “Ree” Tomasek, based in Temecula Valley, CA and mother of a 1-year-old, is their PR person and I am honored to feature Ree as this week’s Vegan Rock Star.

Well, I have always been an animal (and all animal lover) in fact when I was super young I got teased for caring about a skunk that was hit by our school bus and I just couldn’t understand why the other kids thought it was funny! I remember looking at them like they were so insensitive to the loss of life and that always stuck with me. I had an Aunt that went vegetarian when I was in high school and that hugely influenced me too think about my diet differently. In my early 20s, I ultimately started to have some health issues and was recommended to give up meat and when I did I never felt better, physically and emotionally! Yet the connection to go vegan didn’t come until I turned 29 and started my org Girls For Animal Rights and partnering with the Animal Legal Defense Fund for a project. The Director at the time, Vaughn Maurice, simply said that “We don’t eat our clients and you should consider that with the dairy you still consume as it just as harmful if not more so to animals,” that’s what did it for me, that and the wonderfully delicious vegan foods I tasted at an event.

2. Imagine that you are pre-vegan again: how could someone have talked to you and what could they have said or shown you that could have been the most effective way to have a positive influence on you moving toward veganism?
Honestly, I still always do. I have a lot of people I have met either in person or virtually that have private messaged me to thank me for setting a positive example on how to go and live vegan. I think they just see my passion about the compassion aspect of it and my delicious food posts and are like, “Hmm this is something that I think I can try to do!”

3. What have you found to be the most effective way to communicate your message as a vegan? For example, humor, passion, images, etc.?
Really my food posts are what get the most unlikely people on my friend’s lists attention. I have had people from my past that are big time fisherman ask me to please start posting the recipes again (when I slack, lol) because they really want to start to try this “vegan” thing out! But I’m always aware that we all once didn’t make the connection (unless of course vegan since birth) and hopeful that everyone, if shown they can and why it’s better, will consider going vegan. I’ll use social media a lot to get my point across, like the videos that are sad to help people understand if you had a reaction (any) to this poor pig getting hurt than there is a reason why and you should look into that! I’m just not pushy in my approach and want people to see the good in it from my positive and (hopefully) impactful approach.

Health! We are in a time where we are so much more aware, yet companies look to play that down with their marketing campaigns to cover up just how unhealthy the world diet has become. It’s actually quite frightening what is allowed to be processed in our foods with the majority being the meat and dairy industries. I think that along with the fact that people are starting to realize we no longer need to harm animals to survive and thrive are the biggest strengths of the movement.

Our passion! Meaning sometimes some let that get into the way of us delivering our message. We have to remember first we are trying to communicate with others that may not be as emotionally connected to the message (yet) and have to speak to them or about them in a calm rational way that they can understand. Once they are not listening then we can hit them with the hard facts and let them make their decisions, but they will 100% stop listening if you are demeaning or argumentative off the bat.

My why is simply: I have found a way to live my life free of harm to others while flourishing physically, mentally and emotionally. I have never felt better and am much more clear headed, I don’t have the fog I once had weighed down by heavy meat and dairy I was consuming and I’m contributing to a better planet for all. Veganism is really the ultimate lifestyle if you think about it!

Definitely the larger organizations like the Animal Legal Defense Fund and PETA have were the greatest influence in the beginning and have been amazing resources still to this day! Mercy for Animals is what keeps me honest and I love their gentle to approach to why we should be and stay vegan. But in continuing my evolution it’s the smaller sanctuaries locally that I volunteer for and rescue networks I’m a part of. The daily grind of these animal heroes is absolutely incredible and it takes each one involved to keep things going. The recent sanctuary I am hosting an event for in September is run by a woman who left her job in corporate marketing when she was left with 15 horses that were all on death’s door. Literally someone dropped them off at her property and never came back. She just knew he had to do something, started a sanctuary and other animals came pouring in.

To unwind, I take day trips to vegan restaurants I have never been and make it a whole fun day of exploring the area! I’m also actively involved in a vegan society and we host monthly meet-ups and potlucks where we invite new vegans to attend and it’s so inspiring to see them excited to start their journey just like I was. And of course, now, visiting animal sanctuaries with my little vegan baby boy is soul-filling!

In May of last year I had my first son. Being vegan, I of course made the choice to stay vegan throughout the pregnancy (and ultimately raise him vegan afterwards) and was met with some positive, but mostly negative remarks, which was very confusing. Some thought that is wasn’t safe to be vegan and raise a baby vegan and some vegan acquaintances offered unwarranted opinions on my choice to even bring another little being on the planet the way it currently is. So I sought for a resource and support system that saw the same beauty in a vegan pregnancy and thanked my lucky stars to find the online group Vegan Pregnancy and Parenting started by a strong lady, Janet Kearny, with global parents sharing their pregnancies and raising their kids vegan. I loved their mission so much so that in November of last year, I joined the team to help with the world’s first ever Vegan Parenting Magazine they were producing called Raise Vegan which offered digitally and now with our first published issue in May, we have had support from Alicia Silverstone and most recently the newly pregnant Kat Von D.

10. Please finish this sentence: “To me, being vegan is...”
The only way we need to be to survive and thrive. I truly believe it is the needed next step in our human evolution and the way we are meant to be. Once the world makes the connection we will not only save the planet and e pthe animals that reside on it, we will become a more impactful and happy species ourselves. It’s a bit of altruism, but I do believe someday we can get there!